Men are born so averse to the love of God, and it is so necessary, that we must be born guilty, or God would be unjust. 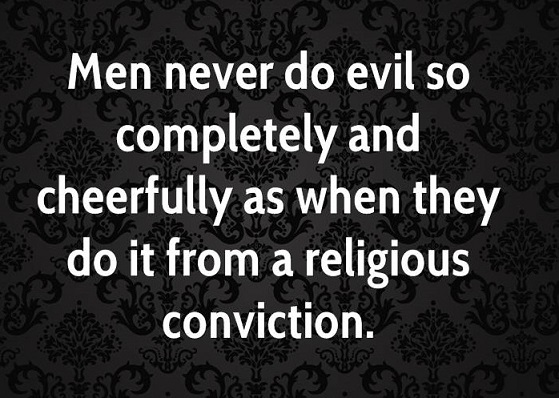 He who hates not in himself his self-love, and that instinct which leads him to make himself God, is indeed blinded. Who does not see that there is nothing so opposed to justice and truth? For it is false that we deserve this, and it is unfair and impossible to attain it, since all demand the same thing. It is, then, a manifest injustice which is innate in us, of which we cannot get rid, and of which we must get rid.

The true religion teaches our duties; our weaknesses, pride, and lust; and the remedies, humility and mortification.

The true religion must teach greatness and misery; must lead to the esteem and contempt of self, to love and to hate.

If it is an extraordinary blindness to live without investigating what we are, it is a terrible one to live an evil life, while believing in God.

Experience makes us see an enormous difference between piety and goodness.

Against those who, trusting to the mercy of God, live heedlessly, without doing good works.—As the two sources of our sins are pride and sloth, God has revealed to us two of His attributes to cure them, mercy and justice. The property of justice is to humble pride, however holy may be our works, et non intres in judicium, and the property of mercy is to combat sloth by exhorting to good works, according to that passage: “The goodness of God leadeth to repentance,” and that other of the Ninevites: “Let us do penance to see if peradventure He will pity us.” And thus mercy is so far from authorising slackness, that it is on the contrary the quality which formally attacks it; so that instead of saying, “If there were no mercy in God we should have to make every kind of effort after virtue,” we must say, on the contrary, that it is because there is mercy in God, that we must make every kind of effort.

It is true there is difficulty in entering into godliness. But this difficulty does not arise from the religion which begins in us, but from the irreligion which is still there. If our senses were not opposed to penitence, and if our corruption were not opposed to the purity of God, there would be nothing in this painful to us. We suffer only in proportion as the vice which is natural to us resists supernatural grace. Our heart feels torn asunder between these opposed efforts. But it would be very unfair to impute this violence to God, who is drawing us on, instead of to the world, which is holding us back. It is as a child, which a mother tears from the arms of robbers, in the pain it suffers, should love the loving and legitimate violence of her who procures its liberty, and detest only the impetuous and tyrannical violence of those who detain it unjustly. The most cruel war which God can make with men in this life is to leave them without that war which He came to bring. “I came to send war,” He says, “and to teach them of this war. I came to bring fire and the sword.” Before Him the world lived in this false peace.